2023: Osinbajo a leader on the wings of grace 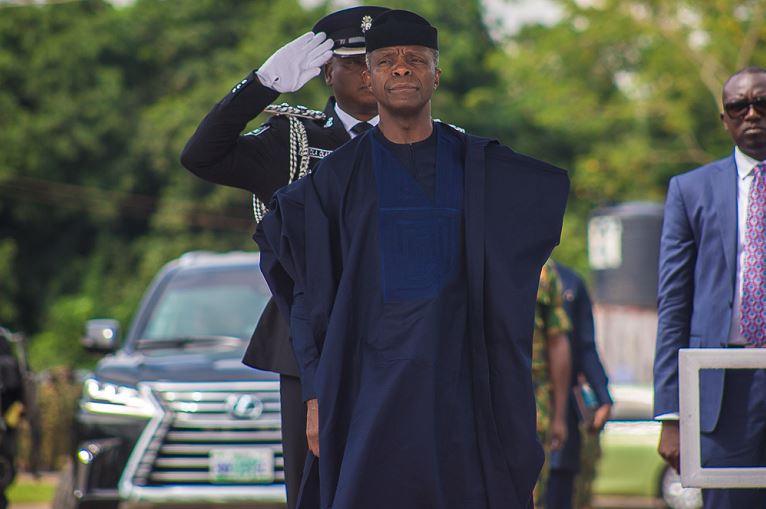 politics of 2023 presidential election appears unpredictable as many political gladiators on the platform of the All Progressive Congress (APC) are already jostling to succeed President Muhammadu Buhari. Political power is understandably expected to shift to southern Nigeria after President Buhari must have completed his two terms of office. This calculation is based on the unwritten agreement of the rotational presidency between the North and the South.

Undoubtedly, the leading and most popular of all the gladiators that are aspiring to occupy the number one seat of Nigeria on the platform of APC is Asiwaju Bola Ahmed Tinubu. Aside from being the National Leader of the ruling party, the former Governor of Lagos State was highly instrumental in the formation of APC and the eventual capturing of power from the PDP-led government in the year 2015.

Realistically, BAT has the goodwill, widespread acceptance, political structure, and financial wherewithal to clinch the presidential ticket of APC and still go ahead to win the presidential election.

Inasmuch as these permutations look strongly favourable for Bola Tinubu, it should also be noted that some forces within the APC are already plotting to stop his emergence as the party’s candidate. It has even been argued in some questers that Asiwaju has since transmuted to a kingmaker, and it is a general belief that kingmakers are never known to have become kings.

In spite of cold political calculations that may not be to the advantage of Bola Ahmed Tinubu, one thing that cannot be taken away from the highly cerebral and smooth operating politician is the fact that he is always a step ahead of his detractors. While his detractors appear fixated on working against his next political ambition, the Jagarban Borgu is also expected not to have gone to bed without giving serious thought to all possible options available to him.

Without a doubt, one quality option that is available to Asiwaju Tinubu and indeed the APC in 2023 is the Vice President, Professor Yemi Osinbajo. The intellectual and legal genius may not be politically savvy like other gladiators, however, his competence has readily made up for whatever he may perhaps be lacking as a career politician. He has evidently demonstrated the capacity to competently administer the affairs of the Nigerian nation on several occasions. Osinbajo had on severally seized the opportunity of the president’s medical visit to the United Kingdom to prove his competence and leadership acumen to all Nigerians.

Osinbajo has left no one in doubt of his ability to skillfully and expertly manage the nation’s affairs whenever his boss travels abroad for a medical check up. The fact that the Vice president is eminently qualified and highly experienced to succeed his boss should not be argued. As a lawyer, Osinbajo became a Senior Advocate of Nigeria at a fairly young age. He had later served for eight years as Lagos State Commissioner for Justice and Attorney General. He has also been in the saddle as Nigerian Vice president since the year 2015.

It will be recalled that Osinbajo had properly pilot the Nigerian economy, strengthened the Naira and ensure security across the country in his capacity as Acting President while President was abroad for medical treatment. It should also be noted that Osinbajo demonstrated his firmness and capacity to the admiration of most Nigerians. One instance of this was when the Vice president promptly sacked Lawal Daura as the boss of the Department of State Security (DSS) in August, 2018.

More so, the twin qualities of integrity and loyalty that have since become very rare amongst Nigerian politicians are what Osinbajo is truly known to have in abundance. He has evidently shown genuine loyalty to his boss, even when President Buhari was critically sick and flown to the UK. All the while, Osinbajo never contemplated any act of disloyalty. He has also resolutely committed himself to the cause of Nigeria and her dreams. He has established himself as a political soul-mate and a dependable ally of his boss, President Muhammadu Buhari.
The Vice President is also a model of integrity as he has for more than forty years maintained an exceptionally clean lifestyle and conducts.

Another outstanding quality of Prof Osinbajo is his deep sense of patriotism and commitment to excellence and hard work. In addition, the alumnus of the London School of Economics is a detribalized leader who also sees himself first as Nigerian and never known to have manifested tribal or religious sentiment. He is a strategic leader that knows what to do when to do the same, and how to get it done.

Despite being a pastor, he has continually promoted religious tolerance and harmony in the country. He is also imbued with a genuine fear of God, which is responsible for his trademark humility, loyalty, and patience. Osinbajo is also a lover of peace and a firm believer in one strong and indivisible Nigerian nation. He is undoubtedly an egg head and a great strategist which are great attributes that great leaders should possess.

Another reason that also makes Osinbajo a credible option for the APC presidential ticket is the fact of his unblemished records in both the private and public sectors. This fact will also make it a lot easy to market him across all ethnic divides in the country. More so, the Vice president is comparably young and he is loved by most Nigerians. As things stand today, Nigerian youths, professionals, civil servants, artisans, and peasants will prefer to have Osinbajo as their next president because of his close interactions with them.

While other gladiators are busy scheming to grab the presidential ticket of APC, Nigerian Vice president, Professor Yemi Osinbajo has always counted on the same grace of God that sought out David amongst his brethren and eventually made him a king. The 64 years old lawyer and pastor are divinely positioned to be the joker of APC in 2023. He is clearly positioned not only to help the party retain power but to also unite all factions and restore lasting peace and discipline to the ruling party.

By Femi, Salako is the Publisher of Triangle News Media